Advanced CODAS is a seamless software enhancement to WinDaq Waveform Browser playback and analysis software. Essentially a tool box of analysis functions, Advanced CODAS offers almost limitless flexibility in its approach to waveform analysis. This application note seeks to examine each Advanced CODAS analysis function in detail in an attempt to equip its reader with an understanding of analysis principles that may be applied in his or her own application. The waveform examples used in the following pages were tapped from the large pool of WinDaq software users. But, the applications they represent should not be interpreted as limiting the potential use of the product in other areas. Such limitations in any given situation are a function of the analysis utilities themselves and the imagination of the user.

It is important to emphasize that all Advanced CODAS analysis functions operate as true disk streamers. Acquired waveform information is streamed from disk, through the analysis function, and back to the disk as a calculated channel. The quantity of data you can analyze is limited only by the size of your hard drive. Further, all waveforms generated by Advanced CODAS are automatically calibrated to the appropriate unit of measure.

The calculus functions of Advanced CODAS, Integral and Derivative, allow flexible unit transformations. The same principles demonstrated in the above example may be applied to virtually any unit of measure encountered in medical or industrial applications.

The integral function generates the area-under-the-curve of an input channel. Unique to Advanced CODAS is its ability to generate a "continuous" integrated waveform channel. No other software package provides the integrator reset methods that allow a continuous, unbroken, automatic display of an integrated waveform. Four methods of integration reset are available: on zero-crossing of the input channel, at specific time intervals, upon a specific level of calculated area, or externally from another channel that has been marked with inflection points by the Advanced CODAS Peak capture algorithm.

Figure 1 — This respiratory flow waveform will serve as the input signal for the integral function and can be described mathematically as ±f(t). 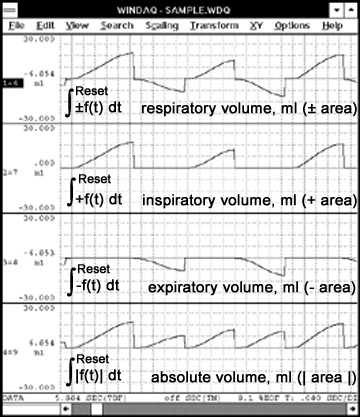 Figure 3 illustrates the level and time reset methods of integration, as well as the use of sample/hold to generate a histogram-like display of peak integral values. The volume per breath window shows the peak values of breath-by-breath inspiratory volumes. Its setup is identical to the top window (inspiratory volume), but with sample/hold activated. The volume per time window illustrates the reset of the integral every 0.8 seconds. The time per volume window shows the use of level reset. In this case, reset occurs when the inspiratory volume reaches a predetermined volume of 40 milliliters. 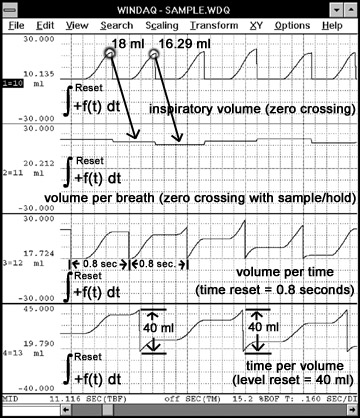 WAVEFORM RECTIFICATION — For Rectified View Of Any Input Waveform

The rectifier section of the integral is available as a separate function and allows input channels to be half-wave or full-wave rectified. 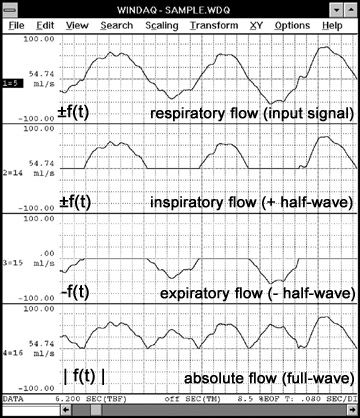 An inherent characteristic of computer-based data acquisition is the ability to generate large data files of waveform information. This is especially true of WinDaq systems with their unique ability to continuously record waveform information to disk. Unfortunately, waveform analysis utilities such as ASYST and Lotus 1-2-3 are extremely limited in the quantity of acquired data that can be imported. Further, waveform analysis often begins with a determination of the maximum and minimum waveform excursions within a defined cycle. These quantities are automatically derived by the Advanced CODAS Peak Capture utility. It detects critical periodic maximum and/or minimum waveform excursions and, in tandem with the Report Generator (see next section), reduces a waveform stream to its component cycle-by-cycle elements: Peak and Valley excursion values with mean and timing information in any unit of measure. Reporting reduced data to your favorite analysis package expands its capacity by at least 40 times, while allowing you to concentrate on analysis and final presentation. 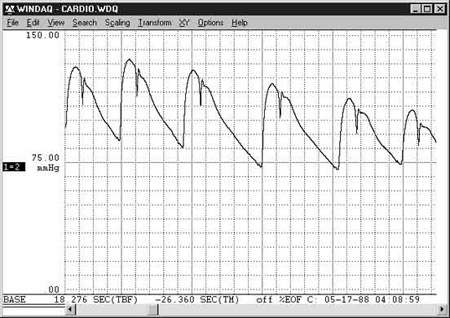 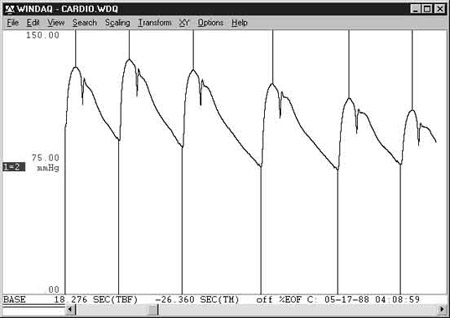 The Advanced CODAS Report Generator (RG) accepts a waveform that was peak captured using the Advanced CODAS Peak Capture utility (see previous section), and generates a report of peak and/or valley points in the waveform's unit of measure. RG contains algorithms that allow it to further report mean value and timing information. Mean values, derived by calculating the area under the curve divided by time, are reported in the waveform's unit of measure on a cycle-by-cycle basis. Waveform cycle timing may be reported as an interval in seconds, or as a rate in Hertz or as a rate in cycles per minute. Also provided are the sample numbers of reported peak and valley points allowing each point-value to be plotted versus time by an analysis package. Designed for flexibility, RG allows you to specify point-value reporting on a cycle-by-cycle, or up to a 32,767-cycle average basis. It supports the data storage format of all popular spreadsheets and text editors (e.g., Lotus 1-2-3, Quatro, PC-Write, Microsoft Word, etc.) as well as scientific analysis packages ASYST and ASYSTANT. Used in combination with the Advanced CODAS Peak Capture utility, RG files put your favorite analysis package to work by allowing you to spend more time analyzing as opposed to extracting waveform information. 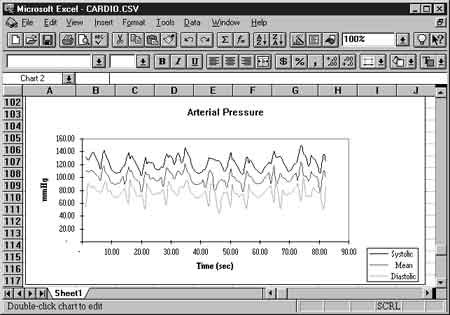 Channel d(LVP)2/dt (no filter) contains a significant amount of noise. However, channel d(LVP)7/dt shows the use of a 7-point balanced moving average filter to reduce derivative noise. Designing the filter as part of the derivative function reduces a two-step process to one, thus eliminating the need to filter the channel before generating the derivative. 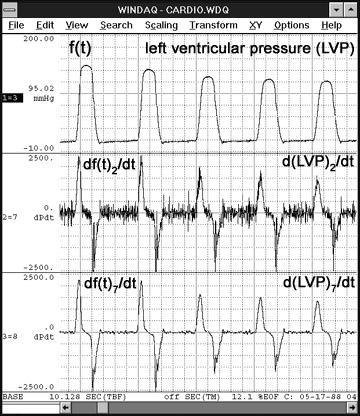 WAVEFORM MOVING AVERAGE FILTER — For Filtering Noise, Or For Generating A Mean Pressure Channel From A Phasic Channel

The moving average filter of the derivative is provided as a separate function. This Iow pass-like filter can be applied to any input channel for noise reduction. It can also be used to generate a mean pressure channel from a phasic arterial blood pressure channel. 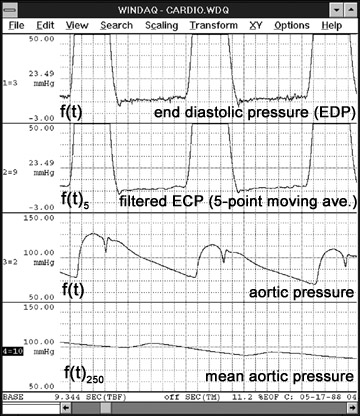 Figure 7 is a print screen from the WinDaq Waveform Browser showing the result of a mathematical operation that generates an amplitude modulated (AM) waveform. The top two waveforms were acquired by WinDaq/Pro recording software. The two bottommost waveforms were generated mathematically using the Advanced CODAS mathematical functions utility. Channel 1 (topmost) is a carrier waveform. Channel 2 is a modulation waveform. Since the modulating waveform must not pass through zero to achieve proper modulation, channel 3 was derived by the mathematical functions utility by adding a fixed offset to channel 2's waveform. We display this waveform as an intermediate step for clarity. In reality, the offset may be specified as part of the formula that generates the AM signal of channel 4. Channel 4 is the AM signal generated by multiplying channel 1 by channel 3. Figure 8 is an FFT of the AM signal generated by WinDaq Waveform Browser playback and analysis software. The center peak of the FFT (the carrier frequency) is shown bracketed by upper and lower sidebands caused by the modulating signal. 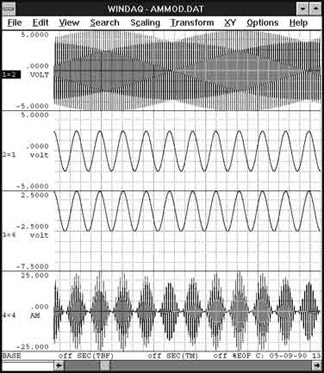 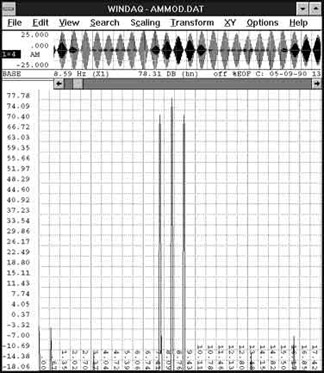 Background: The Ohio shore of Lake Erie is home to two nuclear power plants. Since it is also the home of a seismic fault, the NRC has established a seismological observatory to monitor earthquake activity in the area. Information from the observatory is disseminated to civil engineers as an aid for the design and maintenance of power plant structures.

Objective: To derive a measure of earth displacement from a WinDaq-acquired seismic velocity waveform resulting from an earthquake occurring 3/22/89. 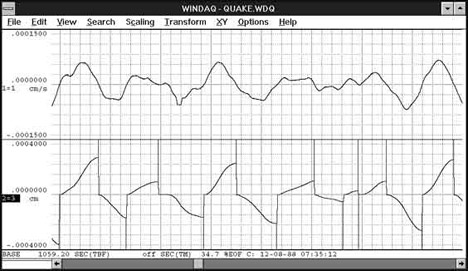 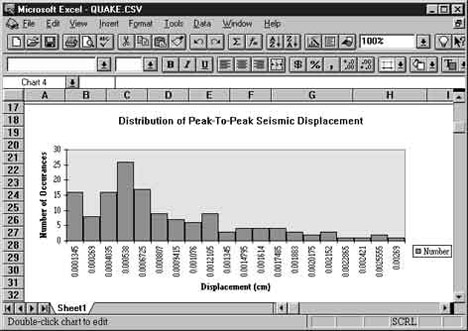 Procedure: The topmost waveform of Figure 9 is seismic velocity (cm/s). Using the Advanced CODAS integration utility, the second channel of Figure 9 (displacement in cm) was derived by integrating velocity with reset occurring at zero-crossing. Since maximum displacement in both the positive and negative directions of each seismic cycle occurs at the peak and valley points respectively, the waveform is passed through the Advanced CODAS peak and valley detector. Vertical markers placed on the waveform by the peak-capture software indicate the peak and valley points of each seismic cycle. The peak-captured waveform is passed through the Advanced CODAS report generator to produce an ASYSTANT-compatible file of maximum and minimum displacement values for each cycle. Figure 10 is a statistical distribution of peak-to-peak seismic displacement for the earthquake of 3/22/89 as generated by Microsoft Excel software.